From self-driving cars to the world’s smallest cars, this year’s Goodwood Festival of Speed showcased exciting advancements in the automotive industry. This article from TechRadar breaks down five ways driving as we know it could change in the years to come.

The UK’s Goodwood Festival of Speed is known for showcasing the fastest and most desirable cars money can buy – but that doesn’t mean it’s all gasoline and burning rubber.

This year, the four-day motoring event also played host to Future Lab, an exhibition of the latest technological developments in space flight, robotics and – you guessed it – the automotive industry.

Among the jet packs and 3D-printed vitamins were some pretty darn exciting advancements in vehicle design, function and accessibility, and we’ve broken down our picks for the five biggest ways driving as we know it could change in the years to come.

It’s worth noting that every concept listed below is either production-ready or currently in development, and so these types of cars – and ways of driving – may hit the road sooner than you think.

Self-driving cars have been on the lips of drivers and manufacturers for years now, and while a commercially-viable, totally-autonomous consumer vehicle isn’t yet on the cards, the world’s major car brands are working hard to stay abreast of developments in this area.

Tesla has, for some time, been ahead of the pack when it comes to self-driving vehicles, with its Full Self-Driving (FSD) mode allowing certain models to maneuver around other cars and objects independently.

However, the company still remains subject to legislative roadblocks that prevent fully-autonomous vehicles being road-legal in most countries, even if that technology were readily available (which is an altogether larger question). 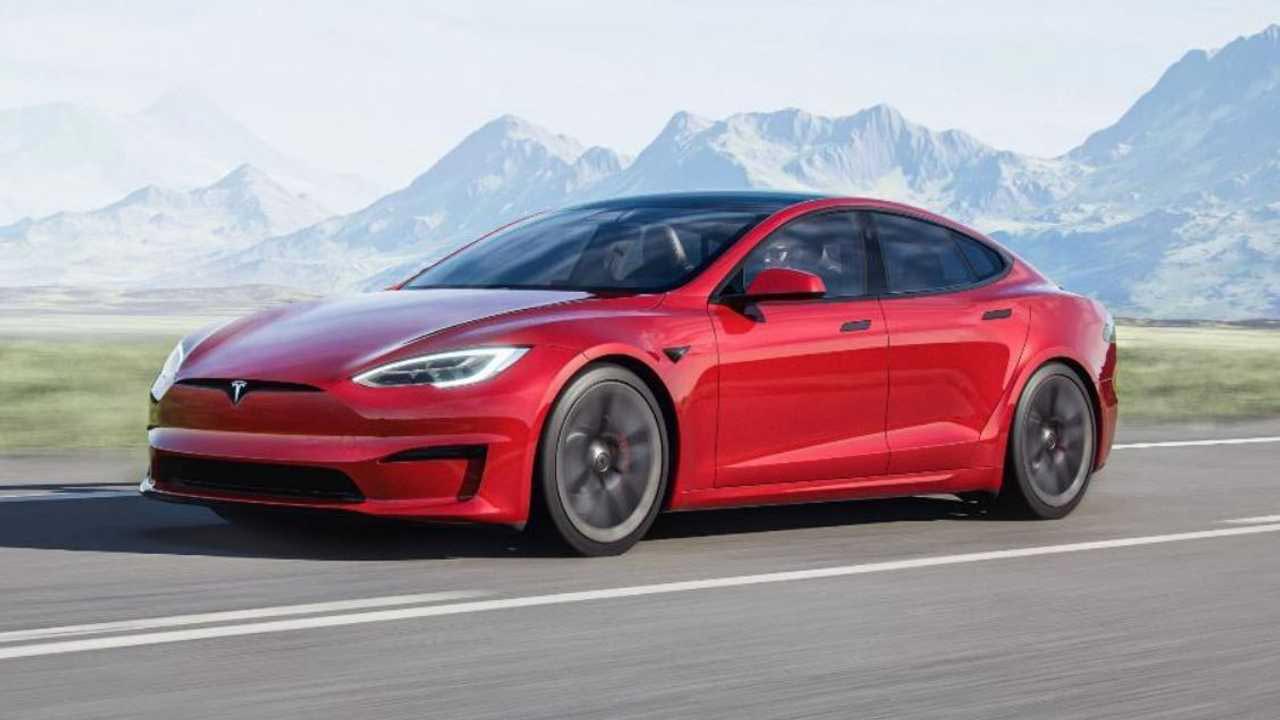 There is movement, though, when it comes to both bringing this technology to the masses and doing so in as many regions as possible.

DJI, the biggest name in drone technology, recently announced a sub-brand committed to developing self-driving car tech for multiple car manufacturers, while the UK, a nation which has been notoriously slow to legislate support of autonomous driving technology, has begun relaxing restrictions on which tech can be used on British roads.

And then, of course, there’s the much-rumored Apple Car – which may or may not be the product to accelerate the self-driving revolution.

Self-driving cars are real and on the way, then, and we’d bank on seeing fully autonomous models within the next five years.

As much as many of us – certainly among the Goodwood Festival of Speed crowd – love big engines and bombastic supercars, the industry is actually heading in the opposite direction. Yes, cars are getting smaller – much smaller.

With the move to electric power well underway, companies are finding new ways to implement batteries into vehicles designed for tight urban spaces.

At Goodwood, we took a seat inside the Microlino EV, a very tiny, very cute electric car with space for just two people (and their shopping).

The car’s only door is also where the bonnet would usually be, to allow drivers to park facing the sidewalk. Orders are already being taken, so expect to see this little machine on roads very soon. 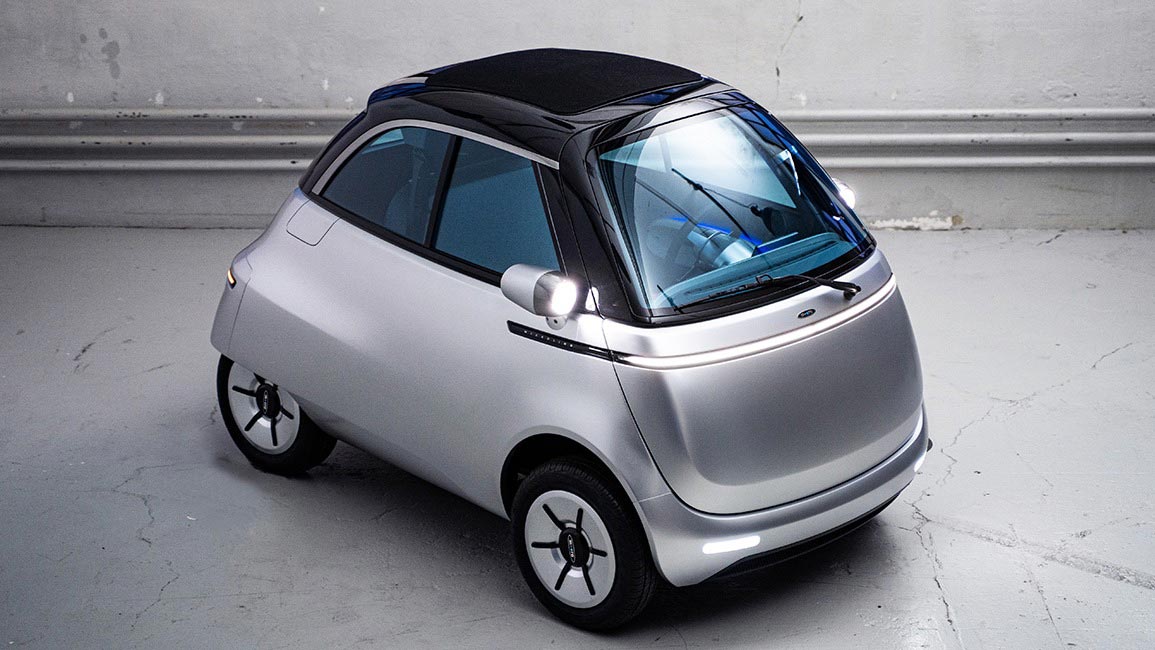 The Microlino EV is neither quick nor boasts a long range range – it’s got a top speed of 55mph (90km/h) and can run for up to 200km (around 125 miles) – but the success of similar cars, like China’s Hongguang Mini EV, proves that today’s consumers are just as interested in cheap, clean, no-frills vehicles as they are the fastest roadsters.

These dinky motors won’t entirely replace the standard vehicular fare, of course, but expect to see smaller and smaller packages coming to a street near you.

3. Cars that help the environment

Yes, you read that right. As much as electric vehicles help to dampen the environmental impact of driving from A to B, they’re still not entirely free of blame when it comes to sustainability (dependent as their batteries are on rare earth materials).

So, what if cars were not only completely environmentally sustainable, but actually improved the natural world around them?

It’s a lofty idea, but one that London-based Heatherwick Studios has implemented into a commercially-viable road vehicle.

The Airo, developed for nascent Chinese EV manufacturer IM Motors, is a self-driving electric car that cleans the air as it drives. The vehicle is equipped with a high-efficiency particulate absorbing (HEPA) filtering system that, according to the company, “cleans the air from the pollution of other vehicles.” 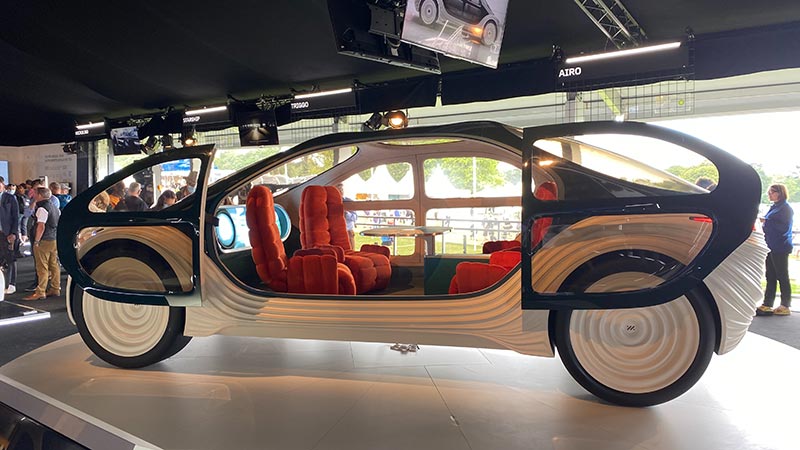 It’s not just a pipe dream, either. We spoke to the Airo’s design team, who told us the car is set to go into production in 2023 as “a fully electric vehicle with autonomous and driver-controlled modes.”

We’ll surely have to wait a while for its fully autonomous capabilities, but the Airo may begin cleaning the air within the next two years.

Oh, and its giant passenger cabin is like a luxury hotel room. Trust us, we sat in it.

At Goodwood, we spoke to Sam Schmidt, a quadriplegic former IndyCar driver, and Arrow Electronics, a US-based tech firm that has teamed up with Sam to develop a system of driving for those without use of their limbs.

Implemented into the semi-autonomous SAM Car, the technology allows individuals like Sam to control a 200mph race car using only their head movements and breath. 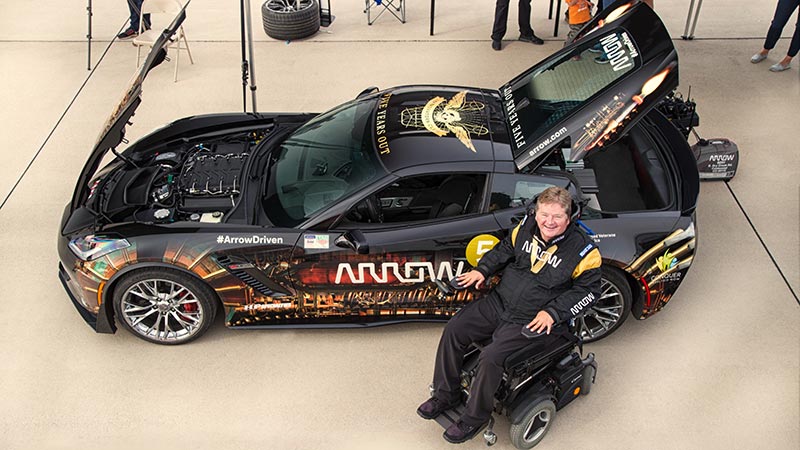 “I could drive this car completely remotely,” Sam told us, “so others [with disabilities] could do the same for different applications. I’d like to see it used in industry to put people back to work. Why not a harvester? Why not a train? They’ve still got their brains.”

The logical extension of that ambition, of course, would be to see this assistive technology adapted to suit everyday road driving, allowing even those with major disabilities to drive independently.

It’s a concept Arrow Electronics is working on with haste, so it may not be too long before driving becomes truly accessible to all.

OK, maybe this one is a little out-there, but we did get our hands on some tech that may one day see us using only our minds to drive – not just using our brains to make decisions, but rather driving a car using the power of our thoughts alone.

At Goodwood, Emotiv demonstrated its tech through the mind-controlled piloting of Scalextric cars – and it really works. 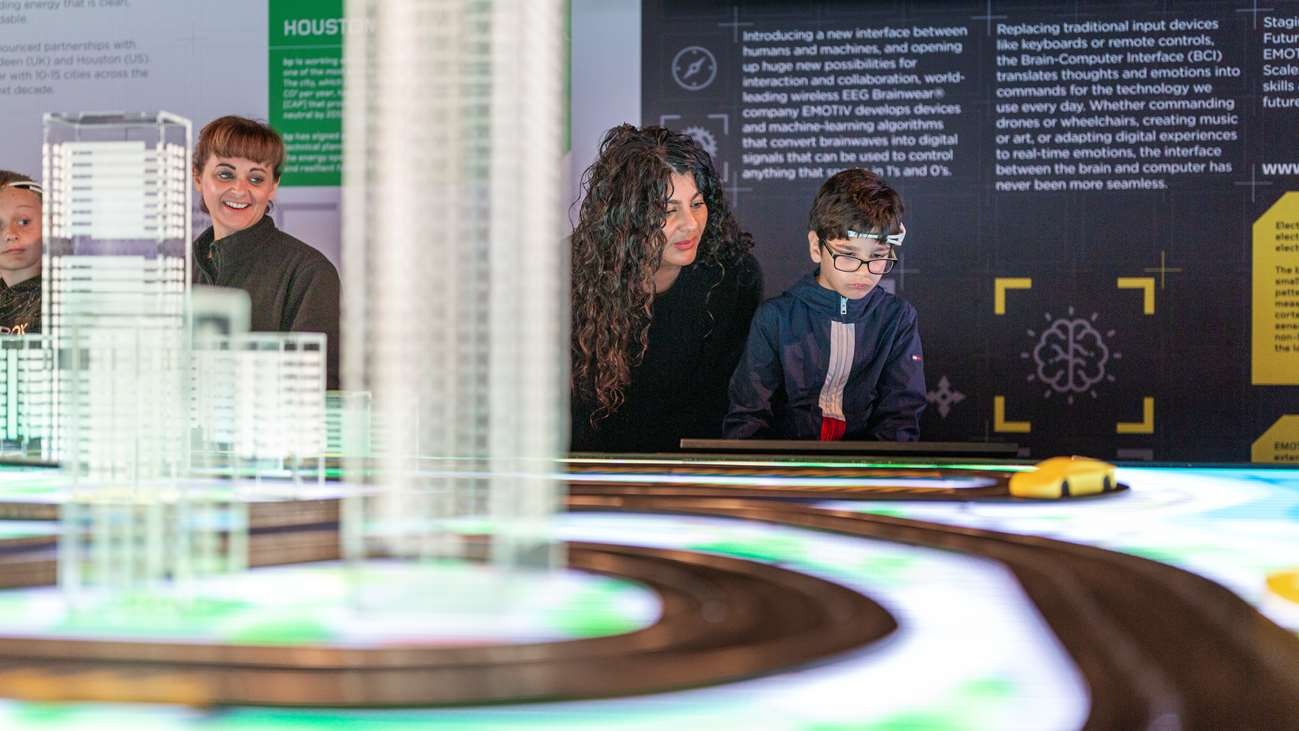 Thought-controlled vehicles may be a little further away than the rest of tech featured here – certainly for full-size cars – but we could still see them arrive (in prototype form, at least) in the relatively near future, especially given that the basic principle of ‘think to go, think to stop’ works so effectively with their miniature counterparts.

In the meantime, though, we’ll stick to putting our pedal to the metal.

This article was written by Axel Metz from TechRadar and was legally licensed through the Industry Dive publisher network. Please direct all licensing questions to legal@industrydive.com.