It’s almost Christmas, which means lots of people around the UK are preparing to visit their loved ones over the next few days. This article by PA Motoring shows the specific areas that are expected to have the longest delays and traffic jams to help you prepare and plan around them if possible.

The worst hotspots for Christmas getaway jams have been identified by traffic experts.

Motorists are being warned to expect “significant congestion on major roads” such as the M25, M6 and M40 as an estimated 20 million leisure journeys are made in the UK this week.

Research by the RAC and traffic information firm Inrix suggests getaway traffic will be staggered over the coming days, reaching a peak towards the weekend.

Thursday and Friday are expected to be the worst days for congestion, with 2.5 million and 2.8 million vehicles respectively making leisure trips while battling for road space with regular commuters.

On Thursday, delays of up to three hours are expected on one section of the northbound M6, while on Friday part of the southbound M40 could see drivers queuing for more than 90 minutes.

Drivers are being advised to use alternative routes or wait until 8pm before setting off to avoid the worst queues.

Inrix data scientist Joshua Kidd said: “Our data shows that compared to a normal day, Thursday 20th December will see the biggest increase in cars on the road.

“With most drivers setting out mid-morning, traffic will become heavier over the course of the afternoon and stay congested into the evening.

“But it’s not just those off to see family and friends – commuters, last-ditch shoppers and online deliveries will contribute to clogging the roads.

“Drivers are advised to seek out alternative routes to their destinations and use the latest technology for real-time updates.”

Highways England will lift more than 200 miles of roadworks on the country’s motorways and major A-roads by 6am on Friday to ensure more than 97% of the network is open for the festive getaway. 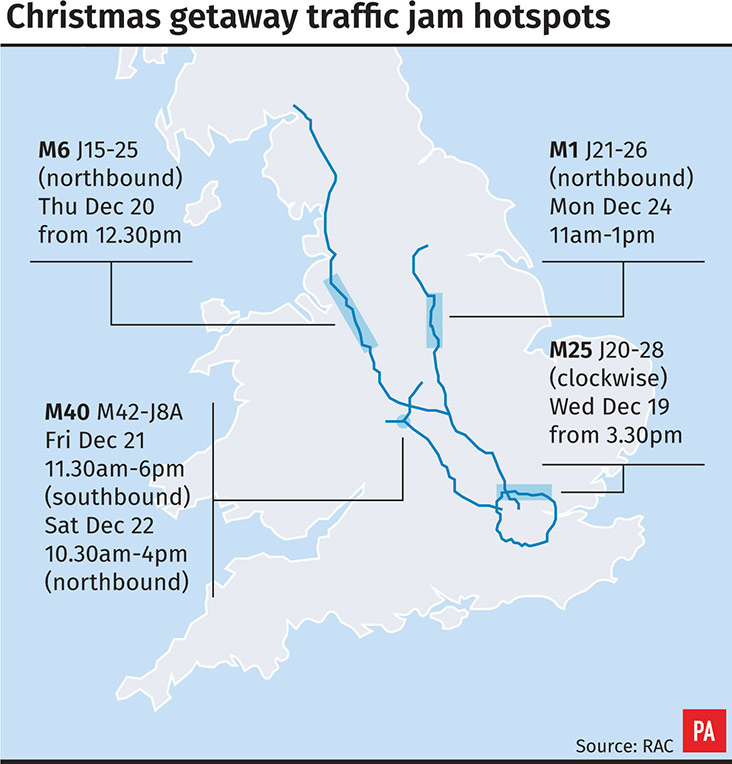 RAC patrol of the year Mark Souster urged motorists to carry out basic maintenance checks on their cars – such as oil, coolant and screenwash levels and tyre condition – before setting off.

He said: “It’s vitally important every driver planning a trip gives their car a once-over to make sure it’s up to the job.

“A single breakdown can bring some roads to a grinding halt, slowing down the Christmas getaway for all of us.”

The anticipated jams will be compounded by extensive disruption to the rail network, with planned engineering work and strikes forcing more people on to the roads over the festive period.

Strikes are likely to affect routes run by Northern Rail and South Western Railway, while Network Rail is planning extensive engineering work on lines running into major stations such as London Paddington and London Victoria.

This article was written by Neil Lancefield and Press Association Transport Correspondent from PA Motoring Service and was legally licensed through the NewsCred publisher network. Please direct all licensing questions to legal@newscred.com.

Five tips for driving in the snow

Driving in the dark – tips on how to stay safe