Journalist and author Martyn Sibley wears many hats: he is the founder of lifestyle magazine Disability Horizons, hosts a podcast series where he interviews a number of well-known and influential disability figures, and has been featured in the Power 100 list of Britain’s most influential disabled people every year since 2016. In this interview, we speak to him about his life, his podcasting journey, and his role as an influencer himself.

To describe him using modern parlance, Martyn Sibley is what you would call an ‘influencer’, but that catch-all title barely scratches the surface of what the 37-year-old really is.

A founder of Disability Horizons, the lifestyle magazine that aims to highlight the achievements of disabled people, Sibley has become too many things for a single business card to contain.

Here, in an exclusive interview, he discusses his disability, his work, and the lessons he has learned along the way.

You’re a man who wears many hats, describing yourself as a “World Changing Blogger, Author, Coach, Speaker & Podcaster. Captain of Inclusion, Charity Adviser, Adventurer, and Smiler!” Which of those titles is most important to you and why?

I’d probably lead with the Captain of Inclusion. Everything I do is fuelled by inclusion. I want a world that is inclusive of everybody. I detest the discrimination of anybody but as a wheelchair user and a disabled person, from the life experience I have, inclusion is very important to me.

The ‘Captain of…’ element is a little playful but I do feel like I have a leadership role now. I started my blog to inspire younger disabled people but I very quickly realised that it was inspiring and educating non-disabled people as well. So everything I do has inclusion at its heart.

You also describe yourself as “a regular guy who happens to have a disability”. How has Spinal Muscular Atrophy shaped the person you are today?

I had my first wheelchair when I was three-years-old. I went to a mainstream school, which I think was an important balance as I wasn’t only with disabled children so I felt more inclusion and more socialised in the broader world.

But then, at secondary school, there was a unit for disabled students with learning support assistants and other disabled students. That was also really important in my development because I was able to have friends who understood some of the parts of life that were challenging and frustrating.

You’ve spoken in the past about experiencing societal exclusion and having a feeling of inferiority because of your disability. Can you elaborate on that?

And I imagine the feeling of inferiority can come as a result of that?

That’s not me saying that because I have a particularly bad upbringing or a bad life, I’ve had a nice upbringing and a very positive life. But from the prism of being disabled, it’s easy to feel like a lesser citizen and to have a sense of less identity and therefore a feeling of inferiority. That is something we all have to fight against.

You’ve had a lot of success as the founder and host of The Martyn Sibley Show, For those who haven’t heard it, how would you sum it up?

The Martyn Sibley Show is basically the podcast version of my online content. The show started when I was voted Britain’s third-most influential disabled person in the Power 100 list [in 2016], so a lot of the early episodes are me interviewing other influencers in the Power 100. As time has gone on the show has evolved and I have more listener interaction but the premise remains the same.

It’s basically me sharing insights into changing the world and everything I do now – the social media, the marketing, influencing, the digital leadership, and all these kind of buzzwords – it’s all about creating content online and building a community of like-minded people around that content. The podcast is just one element of that.

If you love podcasts check out this list we’ve put together of great podcasts for people living with disabilities.

What’s been the hardest thing about creating and hosting a podcast?

In the first instance, it was just around having the confidence to actually put things out there and taking a leap of faith. To be able to create a ‘show’ and an ‘episode’, to dare to do that in the first place was very tough.

Then you have the technical side – how to record good quality audio, how to host it, how to edit, and all the technical stuff you only really learn from doing it. Then there’s getting hold of guests, making them comfortable if they’re not particularly experienced with the interviewing process and all that goes along with that. There have been plenty of challenges and it’s a steep learning curve, but it’s been a lot of fun. 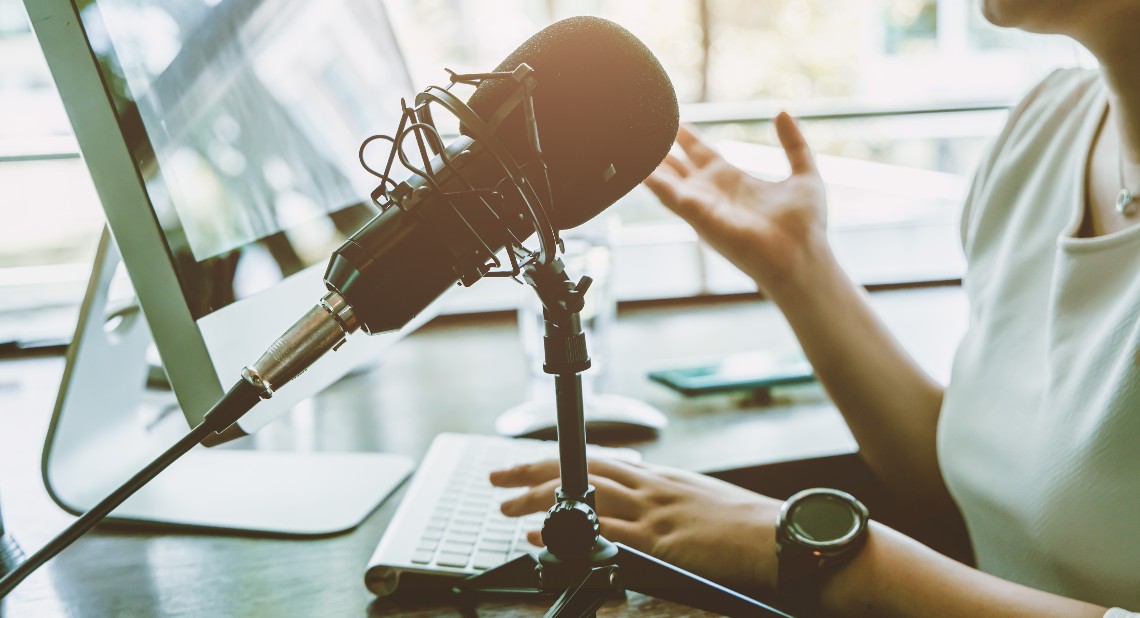 How do you judge success as a podcaster?

I think most people would go to ‘most popular podcast’, ‘most listened’, ‘most reviews’ to judge success, but for me, it’s less about the vanity metrics.

Success to me is enjoying making it and enjoying putting it out there and then getting an email from a listener and them saying the podcast helped inspire them in some part of their life. That’s more important than numbers.

Your podcast is about inspiring others. In the 81 episodes you’ve had so far, which of your guests has inspired you the most?

That’s a tough question but I think two who stand out were (former Paralympian turned politician and disability rights champion) Baroness Tanni Grey-Thompson and (disability entrepreneur) Phil Friend. They’re both really amazing leaders in the disability world and they were both role models for me when I was growing up, so they stand out a little more. I’ve interviewed everyone that was on my bucket list of interviewees so I’m very lucky.

If you could get three other people around the table for a podcast, and you have the choice of anyone alive today, who would you go for and why?

Again, that’s tough. I think I’d go for Barack Obama, Richard Branson, and Greta Thunberg. With Obama, I’d love to talk about giving hope and creating a buzz in a mass movement and in a political change sense. My love of entrepreneurship makes Richard Branson an obvious choice. And with Greta Thunberg, I just love that social activism. I’ve been inspired by what she’s done for the green and sustainability movement and I’d be interested to learn lessons for the disability and inclusion movements from her.

If you could offer one piece of advice for an aspiring podcaster, what would it be?

Don’t put pressure on yourself to have this amount of listeners by the fifth or the tenth episode or anything like that. Just do it for the journey and for the joy of doing it. And be patient, because it does take time. That’s two pieces of advice but they’re both equally important.

And finally, what single piece of advice would you tell your teenage self, based on what you’ve now learned about life?

I’d tell him – me – to just be yourself. Lean into the things you enjoy and that you’re passionate about, the things you have a talent for. Double down on the things that are positive in life. Obviously, look to grow and work on your weaknesses, but I’ve learned as I’ve got older that I can’t do everything on my own. It’s good to be surrounded by friends and family in the areas of life where you’re not as naturally strong – and vice versa.

Be yourself and dream big about what you want to do in life and what you want to achieve and don’t limit yourself. Be realistic that there will be barriers and problems along the way, but if you stay positive, creative, and persistent, everything is possible.

Listen to the Martyn Sibley Show on Apple, Spotify or Google Podcasts.

The Motability Scheme supports families in staying mobile by offering a unique, all-inclusive leasing package for brand new cars from all the major manufacturers. If you care for a child or someone who doesn’t drive, you can be added as a named driver instead. And as well as standard cars from a range of manufacturers, cars with adaptations, Wheelchair Accessible Vehicles, scooters and powered wheelchairs are available too.

The benefits of audiobooks for people with disabilities and carers

Helen Dolphin’s 10 things to do in self-isolation

Topics:
inspiration disability
Get the latest news straight to your inbox