There are lots of exciting developments in motoring technology right now, with a whole host of safety features being included as standard on a number of new cars. This article from Auto Express takes a closer look at some research from the Society of Motor Manufacturers and Traders and shows the scale of these technologies in new car registrations in the UK.

Almost seven in 10 new cars sold in the UK are available with active driver assistance systems such as autonomous emergency braking and blind spot recognition, new research has found.

Analysis by the Society of Motor Manufacturers and Traders (SMMT) of the protective systems offered on new cars – either as standard or an option – has revealed 66.8 per cent are available with collision warning systems. Meanwhile, 42.1 per cent are offered with overtaking sensors (commonly known as blind spot warning), while 53.1 per cent of new cars can be bought with autonomous emergency braking (AEB).

Those figures mean over a million of the 2.5 million cars sold last year were fitted with collision warning, while at least a quarter of a million came with AEB. The rise of such systems has correlated with an increase in road safety, with accidents falling by 10 per cent from 2011 to 2016. 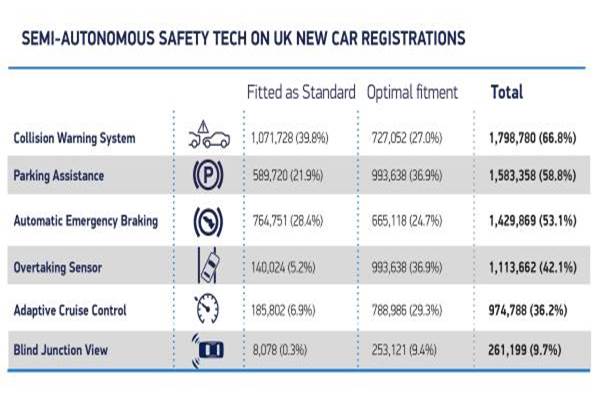 Autonomous emergency braking is considered to be one of the more significant systems to have emerged in recent years, with experts estimating it brings about a 38 per cent reduction in rear-end collisions. And while it’s optional on 24.7 per cent of new cars, AEB comes as standard with an impressive 28.4 per cent of new vehicles.

Commenting on the findings, the SMMT’s chief executive, Mike Hawes, said: “Safety is the number one priority for vehicle manufacturers… Fully autonomous cars may still be some way off but millions of consumers are already enjoying the benefits of new technology which can only help make our roads safer.”