The car industry is still facing lots of supply chain issues, which is reducing the number of new cars available on the market. Keep reading this article by Neil Lancefield from Press Association for an overview of what is causing these issues and some statistics on how significantly production has dropped.

The UK’s automotive industry suffered its worst March for new car sales since 1998, according to new figures.

It is the lowest March total since 1998, which was prior to the introduction of new number plates every March and September. 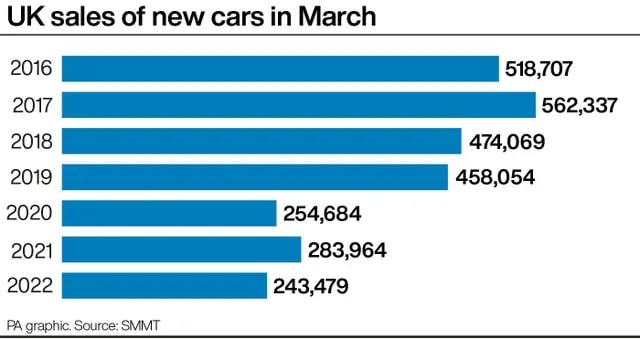 SMMT chief executive Mike Hawes described the figures as “deeply disappointing”, with March crucial for the industry because it is normally the busiest month of the year as buyers demand the latest number plate.

He said: “While demand remains robust, this decline illustrates the severity of the global semiconductor shortage, as manufacturers strive to deliver the latest, lowest emission vehicles to eagerly awaiting customers.

“Placing orders now will be beneficial for those looking to take advantage of incentives and lower running costs for electric vehicles, especially as the Ukraine crisis could affect supply still further.

“With increasing household and business costs, Government must do all it can to support consumers so that the growth of electric vehicles can be sustained and the UK’s ambitious net zero timetable delivered.” 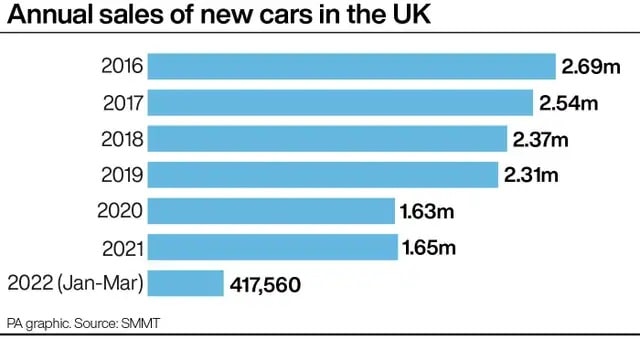 The UK has pledged to reach net zero for carbon emissions by 2050.

The help achieve this, sales of new petrol and diesel cars and vans will be banned from 2030.

Last month the Department for Transport announced a plan to increase the number of public electric vehicle chargepoints in the UK from 30,000 to 300,000 by that date.

A record 64,165 battery electric vehicles (BEVs) were registered in March.

More BEVs were registered last month than during the whole of 2019.

Jim Holder, editorial director of magazine and website What Car?, said: “While it is evident and welcome that demand for low and zero emissions vehicles is growing at a fast pace, it is also clear that the uptake could be far greater if supply issues caused by the semiconductor computer chip shortage, and exacerbated by the war in Ukraine, weren’t having such a devastating impact on sales figures.

“Recent hikes in energy prices and general costs of living are also posing a challenge.”

This article was written by Neil Lancefield and PA Transport Correspondent from Press Association and was legally licensed through the Industry Dive Content Marketplace. Please direct all licensing questions to legal@industrydive.com.

A message from our CEO about supply issues and delays How vehicle supply issues are impacting the Motability Scheme