Cricket umpire John McIntear raised over £12,000 to buy a powered wheelchair after he was diagnosed with terminal cancer to enable him to continue participating in his beloved sport. We spoke to him to find out more about his campaign and his love for cricket. Read on for more.

Motability Scheme customer John McIntear, 62, refuses to let a terminal cancer diagnosis stop him enjoying his beloved cricket. When John could no longer play the game he loves due to a shoulder injury a number of years ago he became an umpire. Then when John was diagnosed with terminal cancer in June 2018 he decided he would carry on umpiring using a powered wheelchair. So far as he’s aware no one else umpires cricket from a powered wheelchair.

“I could have walked round the boundary for the rest of my life but I wanted to be in the centre of things,” says John.

John raised £12,500 to buy the wheelchair. The remaining £8,500 was raised from his GoFundMe campaign, some of it coming from the Royal British Legion as John formerly served in the Royal Navy. The rest of the money was raised via local publicity in press and radio. It took just over six months to raise what he needed thanks to his inspiring campaign which caught the imagination of everyone who saw it.

“I’d seen individuals using powered wheelchairs and that’s what made me think I could use one to umpire. I thought, what stops me doing that? And nobody ever said to me, ‘You can’t do that!’ So I set about raising the money,” says John.

John has a Wheelchair Accessible Vehicle through the Motability Scheme. Motability, the Charity, donated £4,000 to cover all the adaptations needed for his Ford Independence Wheelchair Access Vehicle. This covered the cost of putting in a ramp and two electronic steps on the driver’s and passenger side. “The person at the Motability Scheme that I dealt with throughout my campaign was absolutely fantastic. I’ve never met such an empathetic person in my life. She was so switched on,” says John 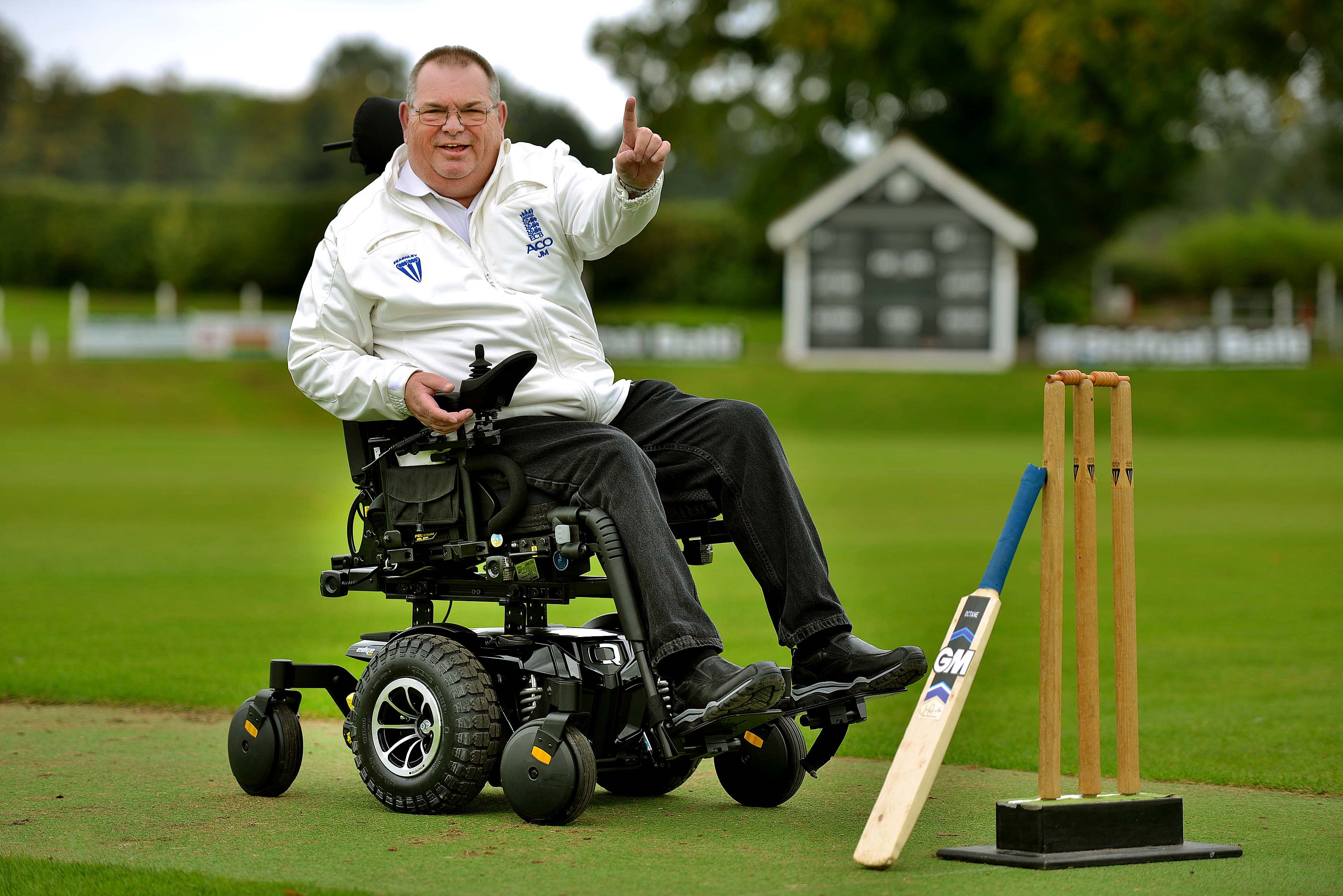 John © Photo by the Shropshire Star

With five people in his household—made up of three children, his wife, and himself—he gets plenty use from his Scheme vehicle which is roomy enough to carry his buggy too so he can go shopping on his own.

“Obviously it was a huge shock when I was diagnosed with cancer, not just for me but my whole family. I have lot of friends within the local cricket community here in Shropshire and they all supported my determination to carry on with cricket,” says John. “I am unable to stand for long periods of time but mentally I am still able to manage a cricket match. So utilising my skills to umpire made complete sense. It was just a case of working out a way for me to do it.”

For more customer stories on how the Scheme helps reinstate freedom and independence, watch Barbara’s story about how she was able to pursue her career goals.

Thanks to the Invictus Games for former service people who’ve suffered often horrendous injuries while serving their country we’re used to seeing disabled sportspeople. There’s also of course the Paralympics. But, as John says, nearly all the officials we see are able bodied.

“People don’t think of having disabled officials too. It’s always assumed a referee or umpire is not going to be disabled,” he adds. “But there is absolutely no reason why you can’t continue your love of the game from a powered wheelchair.”

And in fact it’s quite hard to get officials for recreational sport so John is helping to fill a gap. For no cricket game can be played without an umpire.

John, who is a member of the Association of Cricket Officials, is also part of a movement to try to encourage more people from all age groups, genders and abilities to become officials. “Umpires and scorers are part of your team when you go out onto the field. I want to see more people given the opportunity to go out and umpire whatever their ability. For me this is another incentive to take it forward,” says John.

Due to his illness John had to retire in November 2018 from his job as an enforcement officer with the National Prisons and Probation Service. But he’s remained active.

“In June 2018 following diagnosis I was given only 18 months to live. But you can’t let this catch up on you. I’ve just finished immune therapy which is hopefully holding the growth of the cancer,” says John.

He adds: “This project is of paramount importance not just to me but to the cricketing and sporting world as it will prove a point. If you can’t play your sport, trying officiating instead. I want to inspire and encourage people who are disabled to go out and follow their dream. It doesn’t have to be cricket. The technology is there for whatever sport or recreational activity you enjoy.”

John will be umpiring next Thursday 17th September at 5PM at Worfield Cricket Club, Shropshire.

© Photos by the Shropshire Star

Callum’s story: “The Motability Scheme has impacted all of us”

My journey: Driving with multiple sclerosis

Topics:
Powered Wheelchairs inspiration
Get the latest news straight to your inbox Watch our review of the Permobil M3 Powered Wheelchair