With a magnificent coastline and pathways through beautiful rural landscapes, the UK is packed with great outdoor options for all abilities. To help you plan your next rambling adventure, Rough Guides’ writer Helena Smith has cherry-picked some of the best accessible routes in the country. All recommendations include routes with flat paths, so are much easier for people who use wheelchairs, scooters or other mobility aids, and friends and family can join on bicycle or foot too.

Coastal paths – for days out beside the seaside

Whether you’re birdwatching, soaking in salty views or taking a harbour trip, these routes take you to some of the most beautiful coastland in the UK.

Named after the much-loved children’s book Tarka the Otter, the dune-lined Tarka Trail is part of a 180-mile network of paths on the north Cornwall coast. The route starts at Fremingon Quay, where you can hire a mobility scooter, and then heads east along the River Taw to the sand dunes, where you may spot egrets, spoonbills and kingfishers. 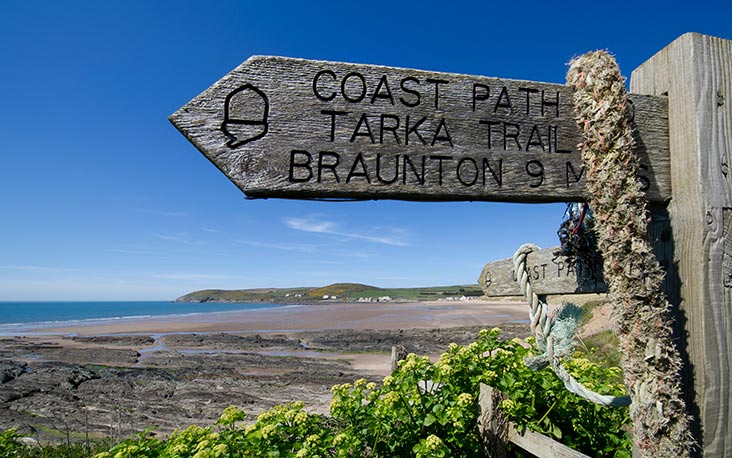 A signpost on the Tarka Trail at Croyde beach, Devon

Located on the Burry Estuary in South Wales, the Millennium Coastal Park enjoys magnificent views of the fabled Gower Peninsula. Find out more about the regeneration of this former industrial area at the Discovery Centre at the North Dock at Llanelli and then explore nine miles of accessible trails dotted with sculptures and backed by sweeping sea vistas.

An area of outstanding natural beauty, Dunwich Heath features tracts of heather and gorse, woods, sandy cliffs, unspoilt beaches and lots of local wildlife. Three designated paths take you over the heath: the 2.5-mile Gorse Walk, the 1.2-mile Heather Walk and the 1.1-mile Birch Walk. All three provide magnificent displays of gorse and heather in spring and summer, plus animal life ranging from glow-worms to red deer.

Also try: For more seaside exploration, try the Norfolk Coast Path around Wells Next the Sea where you can experience a lively harbour and saltmarsh views, or the Newport Parrog Coastal Trail in Wales where an accessible half-mile stretch of Pembrokeshire coast takes you around the old harbour at Newport.

Get up close and personal with a mighty tree is great for the spirit. Here we suggest a stretch of Devon woodland plus a route around some ancient Caledonian pines.

The Forestry Commission’s Haldon Forest Park comprises 3,500 acres of glorious Devon woodland. Two circular, 1.5-mile-long “all-ability” trails are suitable for wheelchairs and people with restricted mobility. The Discovery Trail takes in a great viewpoint, while the Mamhead Sensory Trail offers tactile interpretation boards and sensory waymarkers as well as features designed to stimulate your senses. Along the way, look out for birds of prey, butterflies and rare black fallow deer. 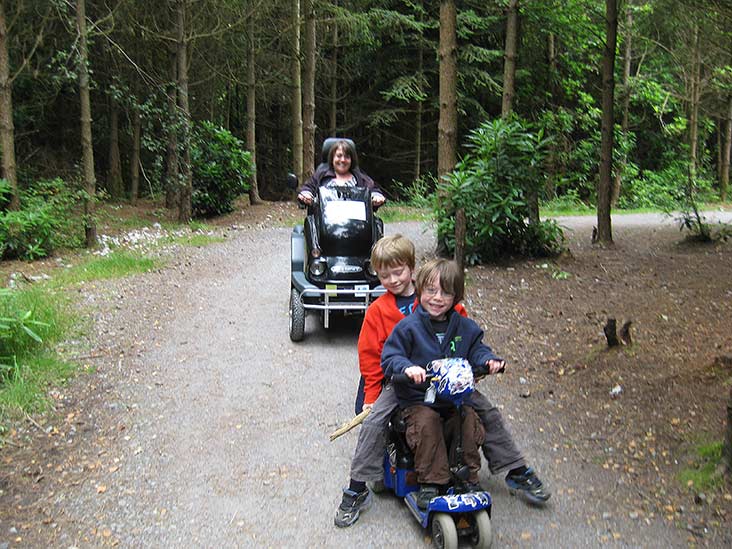 Sitting at the heart of the Cairngorm Mountains, around six miles east of Aviemore,

Caledonian pine forest. The park has two accessible trails, both starting from the visitor centre. The shorter one is the mile-long circular Loch Trail, which takes you along the shores of Loch Morlich, whose long, golden beach is the highest in Britain. The other accessible path is the lower section of the Ryvoan Trail, leading through a beautiful, steep-sided glen to stunning Loch Uaine.

Also try: There’s further woodland walking at the Garwnant Forest Visitor Centre in the Brecon Beacons in Wales, and at the Yorkshire Sculpture Park, where tree-lined paths take you on an artistic odyssey.

Take it easy on a Brecon towpath, and reflect on the shores of Rutland Water.

Built between 1796 and 1812, the Monmouthshire and Brecon Canal linked landlocked Brecon with Newport and the Severn Estuary. Once a route for transporting stone and processed lime, it is now one of the most picturesque canals in the UK. A two-mile accessible section of the Brecon Canal Walk starts from Brecon Wharf and follows the towpath as far as Brynich Lock and back. The trail passes interpretation boards, community art projects and two picnic areas with wheelchair accessible tables. 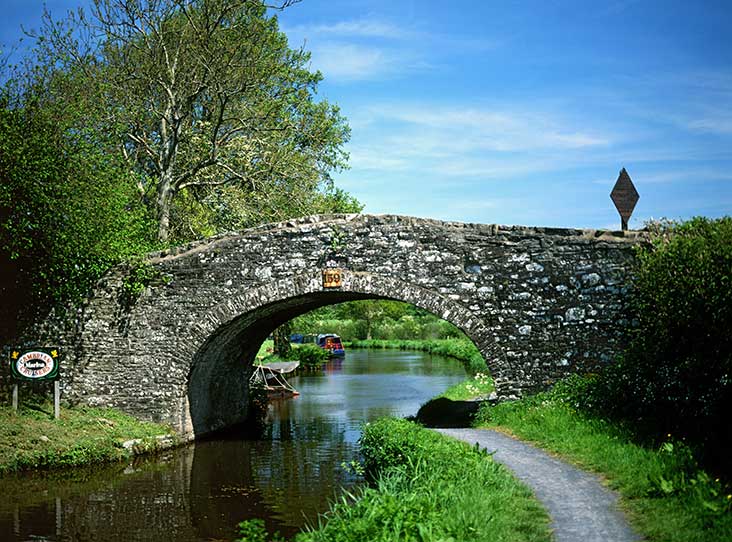 A hump-backed bridge on the Brecon Canal at Llanfrynach, Wales

Horseshoe-shaped Rutland Water reservoir sits on the border of Leicestershire, Nottinghamshire and Lincolnshire and is circled by over 25 miles of cycling and walking trails. There’s a wheelchair-friendly stretch, which has been plotted by TV presenter Julia Bradbury and tested by wheelchair-user Debbie North for The Outdoor Guide. It takes you from Normanton car park to the start of the dam wall, passing Neo-Classical Normanton Church, eerily part-submerged in the reservoir’s water. As well as exploring the lovely tranquil route, take a trip on the Rutland Belle Cruiser, wheelchair-accessible from Whitwell on the north shore. 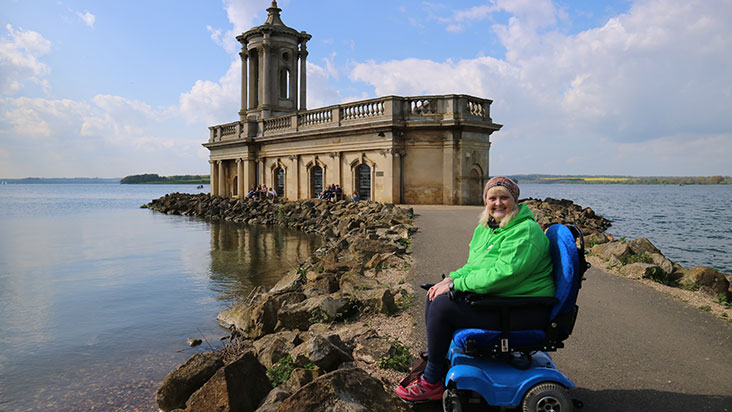 Also try: Take the trail round high glacial Malham Tarn in the Pennines – it inspired Charles Kingsley to write The Waterbabies and might well inspire you too – or try scenic Snowdonia where there’s an accessible route around two lakes at Dol Idris.

Historical routes to take you on a journey back in time

History fans can take a dive into the UK’s railway and Roman heritage, plus enjoy a trip to prehistoric Scotland at Flanders Moss.

The undemanding Walls Drive Trail takes you through magnificent Cumbrian countryside, culminating at some significant Roman remains. Ravenglass car park has accessible toilets and is an excellent base to set off from. The route initially skirts the station of the Ravenglass and Eskdale Steam Railway: after around thirty minutes of smooth progress, you reach the ruins of Glannoventa – once a huge Roman fort. All that now remains is the Bath House, one of the largest existing Roman structures in England.

A remnant of the marshland that covered this area till it was drained in the eighteenth-century, Flanders Moss sits ten miles west of Stirling. The level route, just over half a mile long, on boardwalks and aggregate path allows you to get up close to sphagnum moss, dense peat, lizards and adders. Information boards fill you in on the prehistoric people who once made the bog their home.

Also try: History buffs can try the Eton Walkway, a two-mile trail around some of the landmarks in this ancient town, or the Weymouth Railway Route, where you can uncover railway heritage, as well as the ancient legacy embedded in the fossils of Chesil Beach.

Nature trails – get in touch with your wild side

From a Herefordshire Crag to a scenic Cornish estuary or Northern Ireland’s Mourne Mountains, these are our top wilderness picks.

Presiding over the quaint village of Symonds Yat on the banks of the River Wye, Symonds Yat Rock is a dramatic limestone outcrop rising some five hundred feet from the river. It offers breathtaking views over the Herefordshire countryside and down to the wooded gorge below. The viewpoint has been fitted with a fully accessible, all-ability trail to the top, starting from the main car park where there’s disabled parking and toilet facilities. At the viewpoint, there are first-rate birdwatching possibilities – between April and August look out for the pair of peregrine falcons that nest in the area.

Starting from the beautiful setting of Padstow Harbour, the Camel Trail follows a disused railway line along the Camel Estuary, with some good places to stop for a well-earned pasty or pint. The trail is relatively level with a compacted surface, which you can follow to Wadebridge (five miles), or more ambitiously to Bodmin (11 miles), or even all the way to Wenfordbridge (18 miles). If you’re lucky, you may spot seals at play in the water. Beyond Wadebridge, the route is increasingly wooded, offering glimpses of the river before emerging on the fringes of Bodmin Moor. 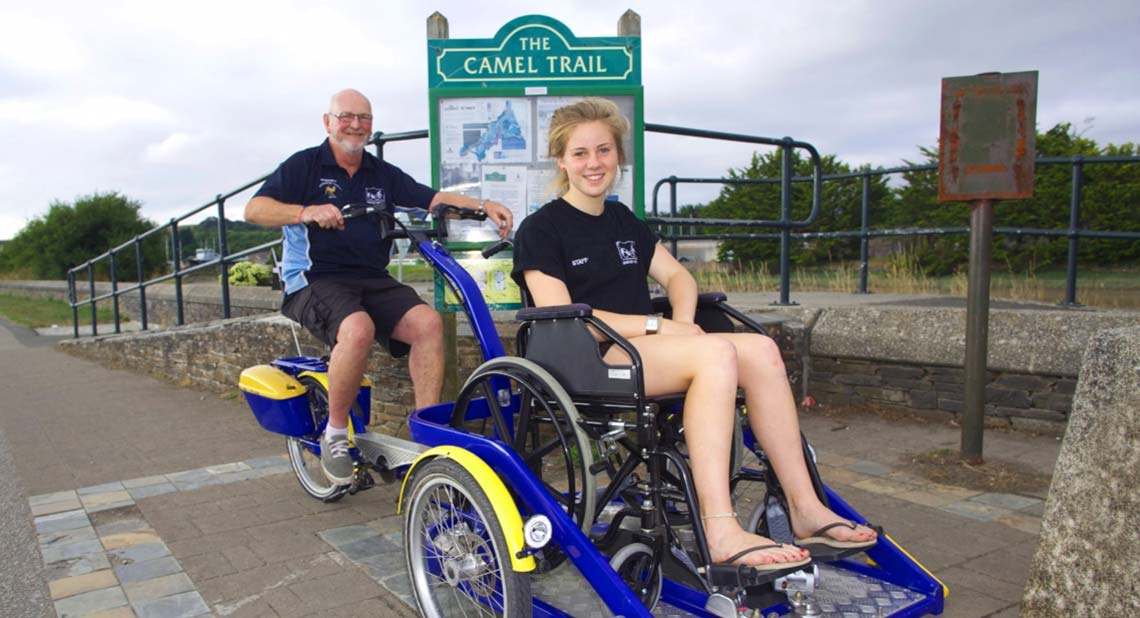 Setting out by low-loader bike along the Camel trail near Wadebridge, Cornwall

A gorgeous accessible loop of about a mile through the Kilkeel River Valley, the Silent Valley Nature Trail takes in the spectacular scenery of the Mourne Mountains. It begins at the car park a short distance south of the Silent Valley Reservoir, built in the 1920s to provide Belfast with water; part of the trail follows the old railway line that brought supplies and materials to the site. The gently undulating route passes through heathland and woodland, and over the Kilkeel River. Look out for numerous dragonflies and damselflies here – you might spot trout or salmon in the water, too.

Also try: More nature-focussed discoveries can be made at the Brockholes Nature Reserve in Preston, with its ancient woodland, reedbeds and extraordinary floating village on the lake, as well at the Wicken Fen Nature Reserve in Cambridgeshire – look out for rare butterflies and otters on the trails here.

For more wheelchair rambling recommendations, take a look these websites:

For other inspiration on great days out around the UK, including some accessible trails, see The Rough Guide to Accessible Britain.

Rambling in the countryside

Choosing the right mobility scooter for you

Learning how to drive with a disability

The best accessible caravanning spots in the UK

We would like to thank the following individuals, companies and picture libraries for their kind permission to reproduce their photographs (in order of appearance on the web page):

Topics:
HobbiesFamilyDays out
Get the latest news straight to your inbox Exploring the Camel Trail in Cornwall Rambling in the countryside A guide to travelling by scooter and powered wheelchair