As the winter chill sets in, there’s plenty of fun, festive entertainment to be enjoyed up and down the country. From music-filled performances to classic pantomimes, Rough Guides author Jacqui Agate picks the UK’s top seven accessible shows for the season.

“The Snowman” at Peacock Theatre, London 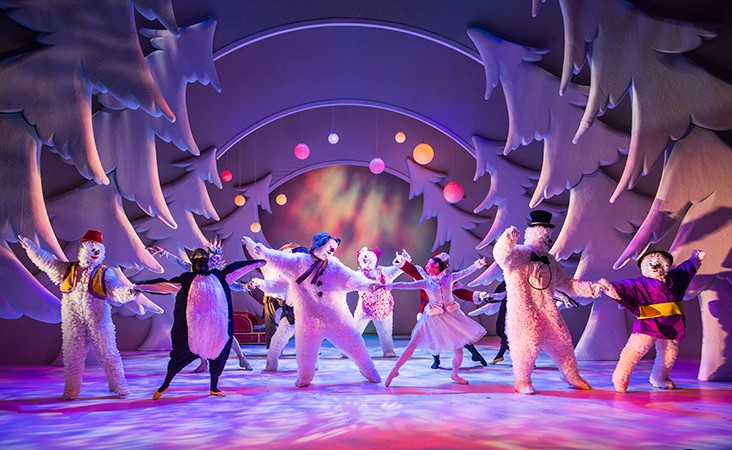 A wintry cast at “The Snowman”

Raymond Briggs’ classic winter tale has been delighting big and little kids for generations – and this year it’s coming to London’s Peacock Theatre. The stage show follows a young boy whose snowman comes to life one Christmas Eve: the pair embark on a festive adventure to the North Pole at nightfall, and elaborate dance performances and enchanting live music bring the tale to life. A highlight is the rendition of perennial favourite “Walking in the Air”, a haunting melody composed by Howard Blake.

The theatre’s entryways are flat, there are lifts to all floors and wheelchair-accessible spaces are available in the auditorium. Those with hearing difficulties will also benefit from the venue’s infrared induction system.

Ongoing dates from now until April 2019 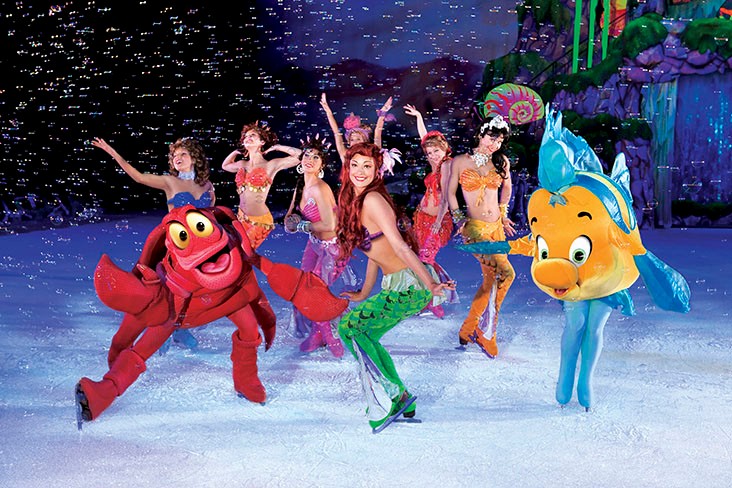 Ariel and her fin-clad friends sparkle in “Big Dream”

Disney fans shouldn’t miss this glittering ice show, which is perfect for little ones. You’ll watch your favourite characters, from Little Mermaid Ariel to Frozen’s Elsa and Olaf, glide and leap across the ice to classic Disney tunes.

Upcoming venues are Nottingham’s Motorpoint Arena at the end of November and London’s O2 from late December through to January. The former has flat entryways, accessible seating and toilet facilities, and lifts to all floors. The latter has all of the above, plus an accessible booking line and trained staff on hand to help those with additional needs. 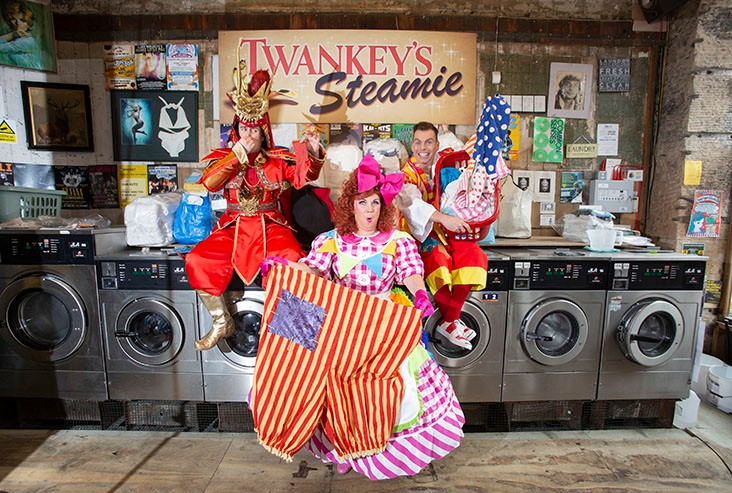 If it’s a classic panto you’re after, book a ticket to see “Aladdin” at Glasgow’s King’s Theatre. The classic Arabian fairy tale is packed with all the traditional panto gags, plus beloved characters such as Widow Twanky and Wishee Washee. Throw in an enchanting set, plenty of thigh-slapping choruses and some colourful dance numbers and you’ve got yourself a Christmas panto the whole family will enjoy.

King’s Theatre is an accessible venue, and along with wheelchair spaces and transfer seats, there are access performances tailored to a range of needs. You’ll find audio described, captioned and sign-language shows, plus relaxed performances for those with an autism spectrum condition or learning difficulty. 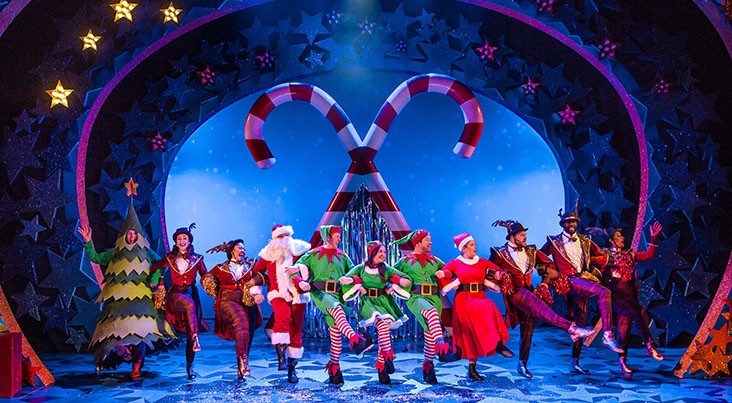 A festive scene delights at “Nativity: the Musical”

If you loved the feel-good, festive movie, then you’ll be even more enamoured by the stage play. “Nativity: the Musical” kicks off at Edinburgh’s Festival Theatre at the end of November. Based on the 2009 comedy blockbuster, it sees a disheartened teacher attempt to direct his primary school’s annual nativity play, after he inadvertently promises the presence of a Hollywood talent scout. This live rendition is explosive, with comedic dance routines, catchy tunes and sparkling sets.

Wheelchair seats (with room for companions) are available – there’s also flat access to the stalls, and you can pre-book one of the theatre’s own wheelchairs if needed. A Sennheiser infrared system is in place for those who are hard of hearing.

“Alice in Wonderland” at the Sherman Theatre, Cardiff

You can join Alice, the Mad Hatter and that tardy White Rabbit in Wonderland this Christmas. The impressive Sherman Theatre is putting on a music-filled version of Lewis Carroll’s story, with dazzling costumes and intricate sets, from the Mad Hatter’s Tea Party to the Queen of Hearts’ croquet ground.

Relaxed, audio-described and captioned performances are planned throughout the season, and people with disabilities are charged a concession, with a free ticket available for their companion. There’s disabled parking and toilets at the venue, and level access throughout – from the flat foyer, you can reach the Caffi Bar area for refreshments. If need be, you can telephone in advance (029 2064 6900) and talk to a member of staff about your needs. 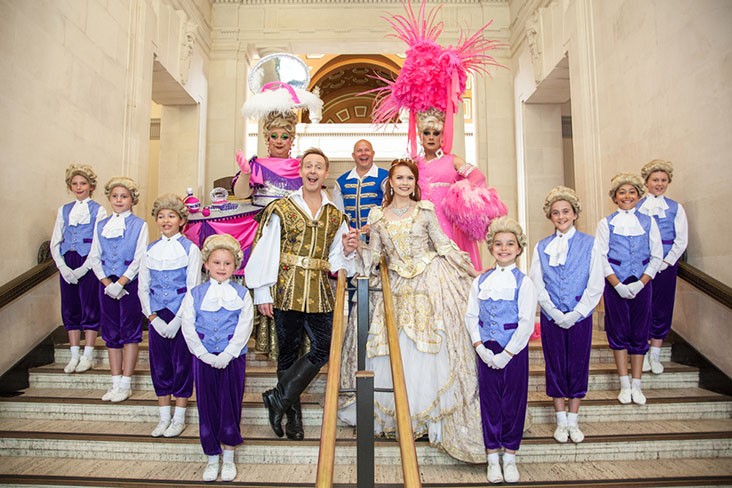 Members of the “Cinderella” cast at the Swansea Grand Theatre

Another night of boos and hisses and cries of “He’s behind you” is in store at Swansea’s Grand Theatre. This year they’re presenting perennial favourite Cinderella, and Ian “H” Watkins from 90s pop band Steps will front the performance as Prince Charming. Kids will love to hate the Evil Stepsisters and marvel at the magical Fairy Godmother as they follow Cinderella on her quest to reach the royal ball.

As well as a sign-language and audio-described performance, there will be a relaxed showing. This includes a cast meet and greet, adjusted lighting and sound, and a dedicated area for breaks throughout the show. For wheelchair users, there’s flat access to the stalls and the bar, plus lifts to other floors, specialized wheelchair spaces and armless seats. Those members of the Hynt access scheme are entitled to a free companion ticket, and the venue also has a hearing loop system.

One for music-lovers, this show is beloved in Belfast, and this year it celebrates its tenth anniversary. A loud, proud musical jamboree, the Music Box is hosted by singer Peter Cory, who guides the audience through choral sets and West End numbers, with plenty of festive songs thrown in. A string of star guests is yet to be announced – past line-ups have included actor Ian McElhinney and musical theatre star Joanna Ampil.

Mobility scooters are available for hire, there is disabled car parking, and lifts and ramps ensure access throughout the venue. There are dedicated spaces for wheelchair users during performances, and there’s a hearing loop, too.

12 great days out for people with autism Accessible things to do during the festive season Accessible Christmas Markets in the UK