For over 100 years the Morgan Motor Company has been manufacturing iconic Morgan cars at the Pickersleigh road factory at the foot of the Malvern Hills. As well as being a working factory, producing about 1000 Morgans a year, the Morgan factory is also a tourist attraction with tours of the factory being conducted as the cars are being built. In this article, Independent mobility consultant Helen Dolphin MBE reviews her recent trip to the Morgan factory. 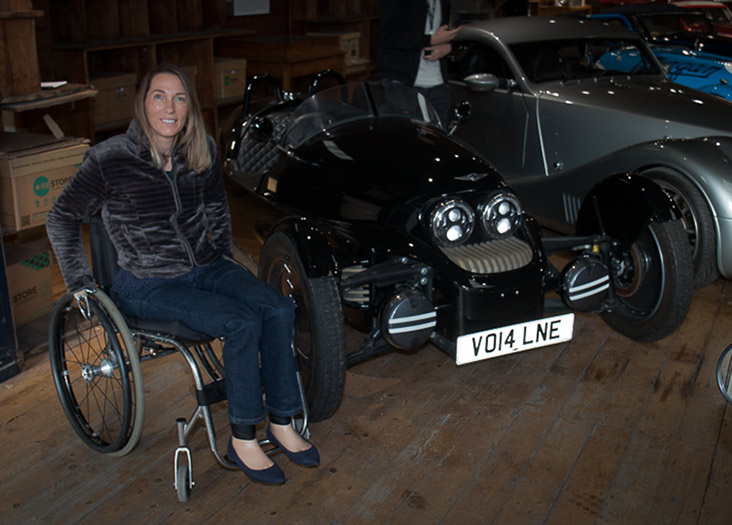 As it is a working factory, all visits have to be part of a guided tour and it is recommended that you book in advance to avoid disappointment, in case the tour is full on arrival. You should also let them know beforehand if you are a wheelchair user as only one wheelchair user can go on each tour. Also let them know if you have any particular disability requirements as they will do their best to accommodate your needs. Adult tickets are £22.50, with no charge for carers. Assistance and guide dogs are not permitted in the working factory, but they will be looked after for you. I left my assistance dog, Fairport behind and he had a very relaxing morning snoozing in the reception.

I had booked the 10am tour and we met our guide, a Morgan owner and enthusiast, and the other tour visitors in the café. The tour started with a short introductory film where we learnt that Henry Fredrick Stanley Morgan built the first Morgan in 1909 to traverse the steep Malvern Hills. This first vehicle was a three-wheeler, built on a budget and the car proved so popular that in 1910 Henry Morgan started production and the Morgan Motor Company was born. The film also briefly introduced us to the range of Morgan vehicles in production which are the Classic, the Aero and the three-wheeler.

Once the film had finished we were briefed on safety in the factory and were instructed to stay on a red walkway throughout the tour. We were all issued with ear pieces to listen to the guide as some areas of the factory are very noisy. Our group had 8 people in it, but the maximum size is about 20. We were all encouraged to ask questions as we went along. I was told that instead of using the steps inside the factory I would need to go out through doors and in again but there were no areas that I wouldn’t be able to visit. It’s worth noting that the tour lasts for about two hours and there is nowhere to sit down or rest so if you would struggle standing for this amount of time it would be worth taking a wheelchair.

Once we had all been briefed we set off on a short walk uphill to the start of the tour. The factory design is such that the floor layout sends each car down the natural slope of the hill as it passes through each stage of the manufacturing process. The first part of the factory that we were taken to was a showroom containing various historical Morgan cars; including three-wheelers that had broken multiple records in the early 20th century through to others that had won race victories at Le Mans. 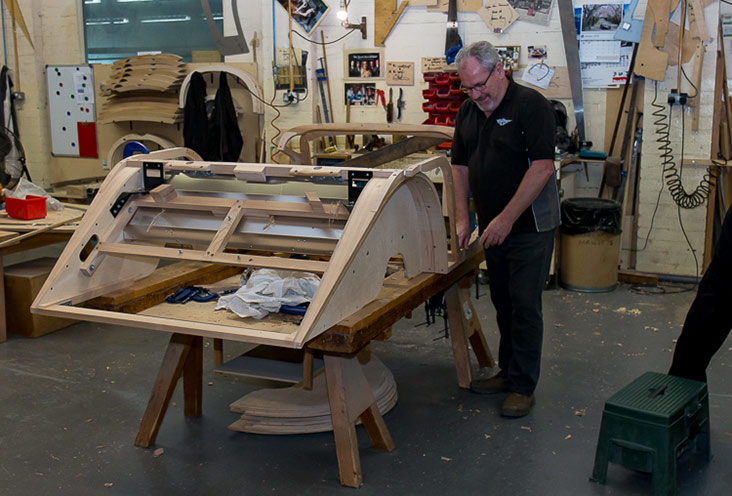 The frame of the Morgan which is made from ash

The first part of the manufacturing process of a Morgan is the chassis and this is the first part of the tour where you see people actually at work. Engine, gearbox and package configurations are defined around a lightweight structure. Whilst we were there a lorry was unloading a large number of V8 engines which are supplied by BMW for the Aero. We then moved on to the wood shop, where we were shown the frame of the Morgan which is made from ash. Our guide demonstrated how durable and flexible ash is by bending a piece, almost in half. I asked why it doesn’t rot and it was explained that essentially it’s soaked in a substance similar to Cuprinol.

Aluminium panels are attached to the frame of the vehicle

From the wood shop we were then led into the tin shop. Here aluminium panels are attached to the frame of the vehicle. Although most techniques used in the factory are quite traditional, they still use modern processes; here rolled edges and hand-stamped louvres meet super formed wings and laser-cut panels. What is different about this car factory is that all the vehicles are hand built so the factory is bereft of robotic conveyer belts and sterile machinery but you can speak to the workers and ask them questions about what they’re doing at any time.

Next on the tour was the paint shop, where we were informed that Morgan customers have a choice of 40,000 different colours, but due to health and safety regulations because of the paint spraying, we could only look through the windows. We were then led into the trim shop where we were told each car requires at least four hides of the finest leather to trim and takes over 30 hours to complete. 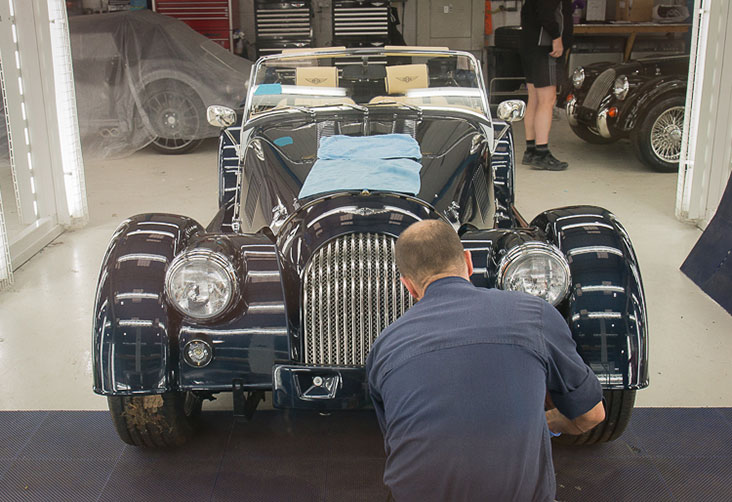 The last part of the factory was the pre-delivery inspection, where each vehicle goes through a three stage polishing process to get a gleaming finish. After the factory tour had ended we were led into the museum which contains more historical Morgan vehicles and lots of memorabilia. Our guide left us here to browse around in our own time. We then went back to the café for a bit of lunch. 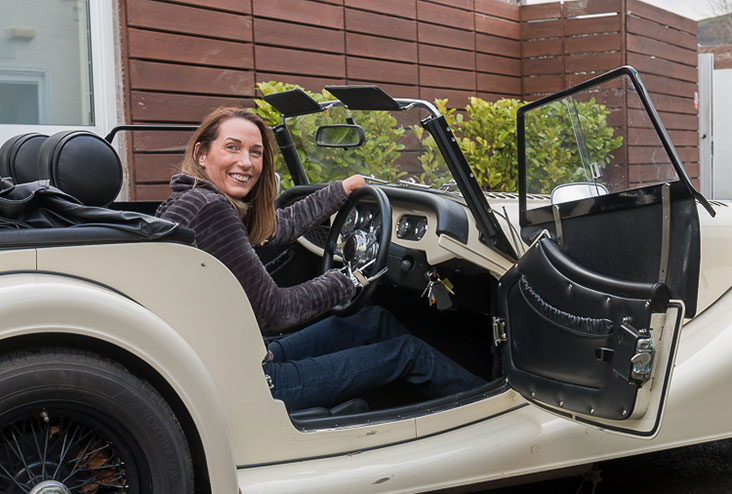 I asked if it was possible to get a few pictures of me in a Morgan and they were happy to oblige. It was a bit tricky getting myself in as the cars are quite small but it was fun to see what it was like. It would be simple to adapt these vehicles for disabled people to drive since they are all made to individual specifications but it could be hard to fit a wheelchair in the boot.

I really enjoyed my visit to the factory and it was an interesting way to see a car being built from scratch. Being a factory it’s not the most accessible place but I didn’t feel I missed out on anything. If you’re interested in visiting the Morgan factory yourself, visit their website for more information on how to book.

The Motability Scheme enables disabled people and their families to access a brand new car or scooter, by exchanging their mobility allowance to lease the vehicle of their choice. If you’re new to the Scheme and would like to find out more, request an information pack below or if you would like to start exploring now, visit our website.

A day at the Goodwood Revival motor racing festival

Days out for foodies: The best accessible food and drink experiences in the UK

Topics:
Entertainment Days out
Get the latest news straight to your inbox Days out for foodies: The best accessible food and drink experiences in the UK